*Last update April 2019 ( and additional comment placed down below ).

When it comes to security add-ons for your browser, WOT ( Web of Trust ) is a good option to install on your computer(s).  It provides a dead simple way to help users avoid dangerous websites.  Once installed the WOT places a colour coded icon next to web links (e.g. on Google result pages). Green is safe, Yellow is questionable and Red is bad and / or dangerous.

Don’t click the red links!  Oh no, you already clicked it ?!?  No worries, WOT cuts you a break and posts a warning page before serving up any RED sites, giving you a second chance to avoid these disreputable locations.

For instance it avoids infection from a known malware site after failing to recognize that as a phishing scam in a Facebook message. It also warns for sites with hidden scripts and for dangerous fake websites with unsafe links and much, much more.

The add-on works with all major browsers, including Internet Explorer, Firefox, Chrome and Safari.

Look for a tutorial on how to install and get the most out of WOT !

Example of search results with the WOT icons already shown in the search engine :

So before you surf to a site you’re already informed ! * BTW : If the icon is grey, that site isn’t rated yet on WOT. Because e.g. it’s rather new, seldom visited or something like that.

And read an interesting interview with a WOT staff member by Opera software in 2013 : >> > BLOG – interview

Is WOT a trustworthy tool ?

The answer is “YES”, but only up to a certain extent. The WOT is an excellent tool for helping Web surfers determine how safe or reliable a web site might be. However, there are many sites – both old and new – that members of the WOT community have not yet examined and / or rated. So while the WOT can be extremely helpful, it should not be your only means of evaluating a Web site. WOT isn’t covering all websites in the world !

YOU ! are your the best defense against malicious Web sites. Err on the side of caution and be ever vigilant. And if you find a site that looks or feels suspicious, the WOT forum provides you with a means to voice those concerns. Share your knowledge by making your findings public.

Remember that the best defense against bad sites is keeping your computer up-to-date with Windows Updates, a firewall and updated Anti-Virus software at all times. This, in combination with the installation of WOT, will help to  keep your computer experiences safe(r). This is the – so called – multi layer approach and the beste counter attack against cyber criminality. Rather than relying solely on technology for protection, the truly multi-layered solution must include crowdsourced security, like Web Of Trust is.

Important note : Remember to back up your data at least bi-monthly to monthly ! Do this ! It,s a matter of discipline and saved me several times already !!!!!!

However, there are still things that can happen from time to time, using WOT isn’t a guarantee on 100% safety, so use your instincts, common sense and best judgements BEFORE you go to sites. If something looks strange / odd or out of place, don’t go there ! If for instance products are too cheap to be true, that usually stinks in a way and such sites have bad intentions, like infecting your computer.

If WOT has given a green rating to a site that you know should be red, review and comment on the site as to why it should be red. Tell the WOT community about it in the forums. Request that they review a site if something is wrong in your opinion. With over 100 million members there will always be some who are willing to take a look at it.

That’s the power of the crowd !

Working together like this, we can all share our experiences with WOT, and use this knowledge to have a safe and secure on-line environment, now and in the future. After all, we all want our beloved web to be clean and safe. And with that available for the future.

The Web Of Trust has published a blog about internet trends for 2016 and beyond, very interesting to read.

Link >> > “Crowdsourced Security: What It Is & Why You Should Participate ? “

Be safe out there!

An update about the status of WOT : What happened and where are we now ?

A brief history in a birds flight, needed to give insight in the present situation :

In 2006 WOT was founded by the two Finnish students Sami and Timo. Their drive was to create  a community carried safety tool that could help to keep our beloved ( and sometimes also disguised ) World Wide Web in the air. Back then ( and still now ) there was a fear that one day the web would be demolished and fall apart, caused by cyber criminality, espionage, deliberate distribution of malware and other threats. * Nowadays we can also add to that the spreading of fake news, ransomware or mean phishing methods and that caused by the political and tactical power games by repressive regimes. Just to mention some.

WOT became a great success because it appeared to appeal to many people and gave them the feeling that they had a weapon in hands to respond to phishing, malware, spam, bad sites and other internet problems.

By coincidence I’ve found WOT in 2009 in the list of Firefox addons and became a member that summer when they had about 7 million members. Deleted that 2009 profile for privacy reasons again and made a fresh start in 2010 with my present profile. And that because I thought : “This is a great initiative and can be a nice safety tool to keep the web going“.

Through the years I became a top level member by putting hundreds of hours in rating sites, forum- and background discussions with other members, translating and improving Privacy Policies, Disclaimers, assisting in building good websites and web content. Finally I was one of the few thousand Platinum level members, active in the heart of the community and awarded by WOT for that two times as WOT

Beta tester and with the “Publicity award”, that was given to 3 members each year. Learned a lot those days about internet safety and much more and gave of a lot of help to others as well. We supported each other, made friends around the world, helped newbies on the way and received something back for all the energy that was put in.

*And as an addition to my WOT activities I built this website, because I wanted to have a platform of my own where I could do more. Sometimes in cooperation with other WOT members from different countries

WOT grew out to a huge community of over 140 million members worldwide in nearly all countries in the world, from even The Vatican to islands in the Pacific. It brought me many relations all over the world and some of them are still my contacts by E-mail, on Linkedin and more. In the past we also had a lot of contact through the MB ( message board ) of our WOT profile, but that has changed now, since WOT is re-styled ( about that later ).

By that time the power of the community was enormous. And WOT had a scale that overran other detection systems like McAffee Site Advisor , Norton Safe Web and others. Those weren’t community driven and “the power of the crowd” gave wings to WOT. Many members volunteered to the community and “we” became a pain in the ass of  all cyber scumbags.

Then one day Sami left WOT for a new job and one and a half year later Timo followed. A big loss for the WOT staff and for the community, because the founders left and the “soul” of WOT was gone. The rest of the staff went on and WOT expanded to Russia and Asia, where in the beginning the base was mostly the English speaking nations and Germany.

Just a thought : When you’re becoming powerful ( like WOT ), you get enemies who are bothered in their activities by such a web tool. We could wait for a counter attack and that happened !

At some moment WOT ended up in a privacy scandal in Germany. Many valuable members left and the imago of WOT was heavily damaged. Their reliability was a discussion issue. That was no accident and I smell a conspiracy, because the best country by culture to have a scandal grow out to big proportions is – privacy sensitive – Germany. I won’t explain why, best not to stand on painful toes. 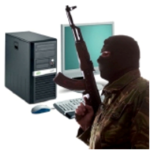 WOT as a company ( running the community ) was compromised and ended up in financial problems.  Apparantly their bussiness model was also undermined. And it took them too long to restore the damage and to delete the ( leaking ) bugs.

I guess that a lot of cyber criminals were rubbing their hands with a big smile on their face. Finally WOT fell in the hands of a lawyers office and was renamed to TOW, I assume that was a restart under a juridical new name.

Who’s the owner and who’s leading WOT now is a question to me, covered in the mist. The system still remains and new programmers are re- building everything. You don’t recognize anything from the glorious old days back, though they still are “in the air” and have a forum and ratings ( with comments ). But the community feeling is gone and a lot of members have vanished or – like me – have frozen their activities. I still have my profile and use the tool ( Firefox addon ) when surfing, but I’m not contributing to the WOT community anymore. The friends and contacts are partly gone and all former links to e.g. online checking tools and the WOT Wiki have been deleted. Good job, guys and girls ! Great ….. that works well ! * E,g. I had to rebuilt this website too, many links to the WOT Wiki were useless and I had to change them all.

So …. Times change and now in 2019 WOT is still a rather valuable tool, but the ratings aren’t always reliable, caused by system bugs,  or sometimes outdated and only give an impression. You need other tools to check if a website has a good reputation these days. That means that we – the members – are partly on our own again, the community has collapsed. 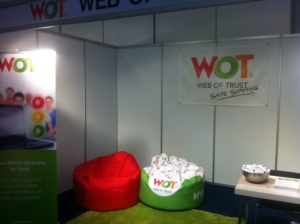 And that “they in Finland” don’t have a clue what they’re doing. WOT – new style doesn’t say me much, I’m not feeling “at home” there anymore. It isn’t appealing at all …..

Did a lot, made blogs for them and even made a flag for the open days at my company, that was later send to Finland ( and used in an exhibition in Helsinki on the wall ).

But the real party is over ! What will the future bring ? So far there isn’t an alternative similar to WOT. By far nothing comes nearby to what we had in the glory days . What a pity !

Note : You can find links to good online checking tools on top of the page >> > “Web design tips”  in the introduction. Use them ! IMHO the WOT on its own isn’t sufficient anymore, other sources of information are needed nowadays.